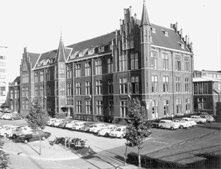 In 1905 the “Technische Hogeschool” developed from the “Polytechnische School”. This change was more than just a name change. In 1905 a big part off the study program changed, this meant that there was room for a study to become an “electrotechnisch ingenieur” (electrotechnical engineer). From 1888 until 1905 a few subjects concerning electrical engineering were already taught, but these subject fell under the physics study. The newly created study was categorized under the division “Werktuigbouwkunde, Scheepsbouwkunde en Electrotechniek” (Mechanical, Maritime and Electrical Engineering), and was mostly just a last year variable of the study Mechanical Engineering. Only from 1919 there is a dedicated section “Electrotechniek” (electrical engineering) in Delft. Even these days you hear people in the walkway say that the ETV is older than the faculty. The ETV was found on the 26th of march in 1906 as a chapter of “Leeghwater”, the study association of mechanical engineering, with as goal the growth of the electrotechnical sciences and represent the needs of the student of the “Technische Hoogeschool”. After one year the ETV had 81 members.

Education was and is the most important part the ETV is concerned with. From the beginning the ETV offered an addition on the education through organizing excursions and lectures. During the first lustre, in 1911, a long excursion to Swiss was organized and in 1930 they went, by boat!, to the United States for a round trip which took six weeks. Maintaining contact with the faculty, especially with professors, is of course the best method to improve the position of the students. In the startup

period of the faculty there were very intense discussions between students and professors about the content of the study, where the ETV acted as a spokesperson for the students. There were even discussions with the faculty about the climate inside the building, something that still concernes the ETV these days. In 1911 the professors from the very beginning were awarded the title of Honorary Member of the association, due to their exceptional effort they showed for the association. In 1922 professor C. Feldman was awarded the position of Honorary Chairman. Nowadays the ETV has 14 honorary members, with Em. Prof. De Kroes as Honorary Chairman. After a few years a complex structure of Boards and committees was formed inside Electrical Engineering. The ETV is represented among other things inside the board of studies and the Education Evaluation Committee, where the ETV is the voice of the students.

An association is not an association without a logo. The ETV is already using its second logo. After the Second World War it was found that the old logo showed to many fascist traits. It was decided it was time to change the logo into the logo that is used nowadays.

In the fifties the ETV had a big growth. The most drastic change in that period was the creation of the first yearbook, not just because this was something very different from lectures and excursions, but also because for the creation of the yearbook a separate committee was formed. In the first few yearbooks, next to the stories from professors and sections, which are still present, there were for example also lists of available lecture notes.
The yearbook quickly grew to the status symbol of the association, something it still is, even while since 1954 many other committees were created.

In the fifties and sixties the TU Delft was expanded with branches in Eindhoven and Enschede. The ETV took this opportunity to expand. This was done with two daughter associations, the “elektrotechnische studievereniging Thor” (e.t.s.v. Thor) in Eindhoven and the “elektrotechnische studievereniging Scintilla” (E.T.S.V. Scintilla) in Enschede. These associations grew over time to be standalone associations.
Inside the faculty of Electrical Engineering there raised a need by the older students for a more specific, section oriented representation. To fulfill these needs a few chapters were created. These chapters are connected to one or a few sections and organise activities for graduating students. The oldest chapter is the “sterkstroomdisput” (SSD), this is a chapter for power engineering (Electrical Sustainable Energy) established in 1964.

At this moment the ETV is a growing student association that builds on a rich history and makes this history richer every day. The members of the association have taken care of this the past years and will continue to do this forever.